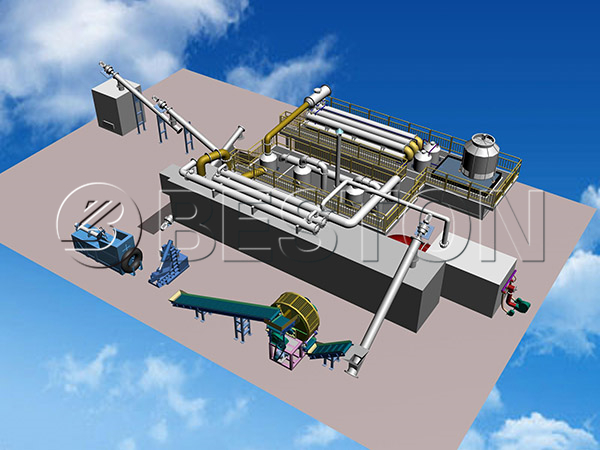 With the increasing social modernization, on one hand, the rubber industry has been vigorously developing, and the rubber products have been widely used in all works of life; but on the other hand, more scrap articles are produced and accumulated to big amount as a result of erode-resistant characteristic of the rubber, thus posing a big public hazard to the environment and hygiene. What is worse, the problem has become more severe in recent years; hence, people vividly described it as “black pollution”. Compared with developed western countries, China are very inexperienced in handling the pollution of scrap rubber, besides, the fund and market are big problems too.

According to the research of a Germany Institute, China will leapfrog to the first place in the world list of annual car output, exceeding 14 billion in 2013. Running cars are not less than 100 million vehicles, according to each car tires replaced 2 times per year on average calculation. Waste tires left are over 800 million every year and the number will continue to rise by double digit yearly. 70% of waste tires are not reclaimed for use, besides, less than half of waste bias tires are reclaimed. China is currently suffering from an insufficient rubber source, which is mainly exported from outside countries. Hence, to improve the management of reclaiming waste tires has called an immediate action.

A simplest method to handle rubber wastes is to produce reclaimed rubber powder and refine oil. Comparatively, producing reclaimed rubber restricts the future development of reusing rubber wastes as a result of its disadvantages like the high manufacturing cost, narrow sales channel and short service life of plastic runway and other rubber products. Oil refining has attracted people’s attention with its good sale, fast turnover speed on current fund and high profit margin. For instance, the average price for recycling waste tires in China is 1150 RMB/ton at present; the rate of oil refined from waste tires is up to 45% plus the production cost like fuel, labor, water and power expenses; therefore, to produce one ton of tire oil will only cost about 2400 RMB, compared with its current market price 3800 RMB/ton to 4800 RMB/ton.

The main engine of oil chemistry equipment with waste tires deployed in China mainland, mainly uses vertical fixed processor with processes below: first, the waste tire is put via the cracking processor top by the operator; second, seal the feed inlet and the processor bottom will slowly heat the tire with residues, coal or firewood left as the fuel. Generally, the cracking processor has a volume with 5 stere and one-ton feed. Thus, it usually takes 12 hours to refine once. After the process is completed, it is required to cease for another 12 hours. The open the taphole the bottom of the processor will be opened for dumping the dreg after the processor cools down; the material will be fed from the processor inlet and then enter to next circulation.

2. Each set of device is comprised of ten parts.

3.1 This device has rapid, continuous and canned feeding and tapping system and the efficiency is more than three times to the traditional Intermittent Operation Equipment.

3.2 The matching pressure release device is capable of increasing the value added of oil product to a large degree through deeply processing the oil product.

3.3 Manufacturing the whole set of device should be carried out in an environment of no smoking and no smell, thus the device having excellent safety and environmental protection property.

3.4 The split treater of the key equipment for this achievement has a horizontal integrating revolving structure, and comparing this structure with the bygone old equipment, it is found the fuel for the new equipment is fuel oil, and the residue generated in the burning course of fuel oil can fully reach to the exhaust discharge standards of all countries in the world, thus it being able to be used in any countries.

3.5 High effective fuel gas heating system: when the temperature of the heated gas reaches to 150℃, a large amount of gases—-methane to butane—that cannot be fluidified in common temperature and pressure will be generated. And these gases can generate a large amount of heating energy after being burned fully in our specially designed gas burner, thus saving energy to a large degree.

3.6 The latest technology and the whole split and oil product collecting system developed by the company can be used for this device, and the produced fuel oil has some advantages such as high quality and high oil output rate.

All series of equipment sold by our company can be enjoyed the perfect after-selling service and the free repair service for one year as well as the maintenance service for the whole service life, thus completely resolving the customers’ troubles after buying.

With the rapid advance of the global economy, the demands of rubber market to carbon black become more and more. And among the numerous rubber products, the market price of the cheapest N330 carbon black is 2600 RMB/ton, however, the carbon black produced by our revolving response treater can be the raw material to produce N330 carbon black except being able to be fuel, thus it having a large market demands and a wide prospect.

Energy source has been the main factor limiting the economic development of each country since the 1990s with the daily increasing trend of petroleum in short supply, the petroleum explored in the whole land of the globe will be exploited out in 35 to 45 years! Seeking new energy sources has become the question all countries in the world focus on. China has a broad tract and a large population, and with the rapid development of the market economy and the popularization of vehicles and machinery, the demands to petroleum is increasing continuously and China has changed from a petroleum exporting country to an importing country. In the first half year of 2009, we still need to import 200 million tons of crude oil from foreign countries to be able to meet the demands of domestic market except the domestically produced crude oil in accordance with the news publicized by China Petroleum & Chemical Corporation. Since 2010, the international price of crude oil increases time and again, and the price of each bucket of crude oil has exceeded 92.78 dollars (quotation from OPEC in January 7, 2013).

Then whether the sources of the raw materials for refining oil can be guaranteed?

At present, China annually output on car ranks to the first in the world with an output of more than 13.2 billion pieces in 2012, running cars are not less than 100 million vehicles, according to each car tires replaced 2 times per year on average calculation. And the number of annually brought waste and old tires is more than 800 million pieces. Therefore, a country will not need to worry about the supply of its raw materials, if it establishes one hundred factories, with an annual ability to dispose 45000 pieces of tires annually so as to extract carbon black and tire oil.

1. This device has rapid, continuous and canned feeding and tapping system and the efficiency is more than three times to the traditional Intermittent Operation Equipment.

①. When some problems occur in the system, closing the induced draught fan can cut the heating source in sudden to ensure the system’s safety.

②. The heat exchange distance is more than that of the old equipment by 5-7 times, thus having a higher thermal efficiency.

3. Equipment’s Shape: beautiful and decent, and economic and practical.

4. Catalyzing heat split technology and chemical extracting technology for product; we can provide special catalyst according to different requirement of customers. The catalyst can decrease the sulfur content and density and solidifying point, improve the smell and color, remove the impurity of the fuel oil. It solve the problem which plagued plastic recycling project with the disadvantages of lots of impurity, bad smell and difficult to store. Take the fuel oil from tires for an example, the color of oil will be changed from black to transparent red, and the oil can keep longer time for store with better oxidation-resistance.

4. The equipment has reasonable design and advanced manufacturing technologies and a high automation degree and complete safety facilities.

2. Waste industrial mixed plastics, and allow multi-kind flotsams exist at the same time, but PET is an exception.

1. Design the installation drawings according to your site.

2. 1 year warranty, engineers available to service at any time.

3. Periodical call visit, to make sure there is no problems of the equipment.

4. Design specific maintenance program according to different situation of your plant.

5. For each set of machine, one technician will be sent to guide your installation, test the machine and train your workers. Besides, we will provide one month’s service for free.

Pretreat and crush waste tires and send them to split processor with no break negative pressure order to catalyze and heat in order to filter out oil steam; oil steam shall pass light and heavy components separation device; light component shall enter the condenser and meanwhile residues shall be discharged automatically in succession. But the liquefied part shall be condensed to rubber oil; and the part that cannot be liquefied shall be input into heating supply system for burning by way of combustion gas purification system.

The security of main device, the main components of the exhaust gas that cannot be liquefied are alkenes class from C1 to C4, whose direct burning is dangerous. Therefore, we shall first make them pass water seal of the first safety device before burning up them as fuels, and further make them pass the gas burner of the second safety device; then the complete safe production shall be realized.

Treatment of the three wastes in the course of production.

By means of full combustion in water seal and gas burner of safety devices, the pollution of exhaust gas shall be eliminated and a large amount of fuel shall be saved. Water shock spraying desulfurization dust collector shall be used to discharge smoke and dust; the discharge of smoke and dust shall meet related standards of GB13271—2001

Faintly acid waste water shall produce in the course of treatment of oil products (about 50 kg waste water each ton oil, small volume and tractable); after neutralization by adding faintly alkaline liquor, the neutral waste water shall be harmless with three-grade filtration and be discharged into special evaporation processor to vapor (heat source is the flue residual heat of main processor).

The residue left from catalysis and split of waste tires is carbon black and steel; there is no waste solid left.

Take the pretreated waste tires as raw material, and BLJ-10 type as equipment;

The above analysis and calculation show that it shall be beneficial both to the country and civilians to extract carbon and rubber oil from scrap rubber. It is feasible in terms of technique, with advantages of small investment, much raw material, rapid recovery and favorable prospect; therefore, it is an optimal choice to invest.